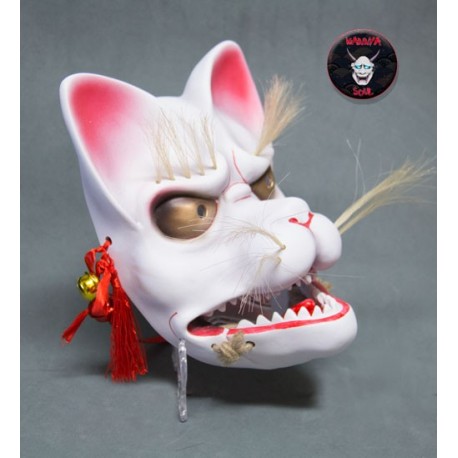 The kitsune mask has become a staple of Japanese pop culture, its eye-catching red and white designs frequently appearing in anime, manga, and other artistic channels. Since it's often seen in the context of festivals, many people think of it as some kind of lightweight prop, but its roots go much deeper than that. Foxes have a special place in Japanese culture, in both folk and religious applications, and as such, the kitsune mask inherits meaning from its ties to the animal itself. Japan also has an incredibly rich history of masks, which explains the actual existence of the kitsune mask as a physical object. Given that the kitsune mask is entwined in both of these threads, it carries a lot more cultural significance than one would initially guess.

Foxes in Japan are contradictory creatures, seen as either benevolent or malevolent depending on context. In Shinto, one of the primary religions of Japan, the fox is considered a messenger of Inari, the guardian deity of fertility, rice, agriculture, and industry. Shrines dedicated to Inari feature statues of foxes, and worshippers often set out offerings of rice, sake, and other foods to appease Inari's messengers.

In folklore, foxes are believed to be shapeshifting tricksters, pranking innocent humans whenever they get the chance. There are stories of foxes taking on the appearances of beautiful women and seducing unsuspecting men, or disguising themselves as monks to swindle some gullible villagers (the song at the very top, Megitsune, which translates to female fox or vixen, refers to this deceptive aspect of foxes). The term Kitsune no Yomeiri, or Fox's Wedding, is made in reference to two curious phenomena—mysterious floating lights at night and rain showers in sunny weather—and these bizarre conditions are attributed to the tricky nature of foxes. In the folklore sphere, one application of the kitsune mask is in popular reenactments of Kitsune no Yomeiri, in which members of the fox wedding procession don masks.