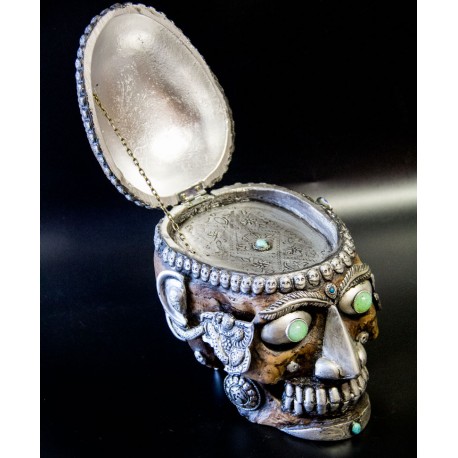 The word Kapala is a Sanskirt term meaning skull, bowl, vessel, begging bowl and is a decorative human skull used as a ritual implement in both Hindu and Buddhist Tantra.  They were often carved with decorative designs or elaborately mounted with precious metals and jewels.  There are two main types of kapalas – those that use a full skull, and those that only use the skull cap or top-half of the cranium.

The kapalas were usually made from skulls collected at sky burial sites, an ancient Tibetan burial custom, still practiced today, in which the bodies of the dead are dismembered and scattered over open ground to ‘give alms to the birds’.  It is a ritual that has a great religious meaning of the ascent of the soul to be reincarnated into another circle of life.

Once collected, the skulls would be specially prepared and elaborately anointed and consecrated before use. It would then be decorated with carvings, jewels of silverwork before being used as a ritual implement.

In Tibetan monasteries, the kapala was used to hold dough cakes or wine, used symbolically as flesh and blood offerings to wrathful deities of Hindu India and Buddhist Tibet.  When symbolising blood it is called Asrk Kapala, and when with flesh it is called Mamsa Kapala. The dough cakes were not just pieces of bread, but were shaped to resemble human eyes, ears and tongues.